5 lessons we can all learn from the editor of Vogue herself: Anna Wintour

Ever since I can remember, I’ve been in awe of Vogue. On every trip to the capital, I would walk past the Vogue offices in the hopes of seeing Alexandra Schulman (Editor of British Vogue at the time) with my CV neatly folded in my handbag, and I’ve lost count of the number of emails I sent during my university days begging for an internship.

Before we get started, let’s quickly explain who Anna Wintour is. Wintour is the editor of Vogue US and, without a doubt, one of the most influential, and often feared, women in the industry.

You might know her better as that lady always wearing large sunglasses, with a bouncy bob and fringe who gets the front row seat at every fashion show. She was also the basis for Meryl Streep’s character in The Devil Wears Prada. You know the one?

You’re probably thinking: “How as a financial planner can I relate to a fashion editor?”… And before I produced this blog I would’ve thought the same! However, Wintour may have more of an impact than you’d have ever imagined…

1. We all need to move with the times

After 34 years at the helm of the biggest fashion magazine in the world, Anna Wintour has moved with the times and never got stuck in a rut. That’s a lesson for us all.

Even though you might be at the top of your game, there’s always someone waiting to jump in your seat, perhaps a younger financial planner, so you need to adapt and change.

Your website and branding are just basic examples of this. Your business has evolved in the past 10 years, and so should these aspects of it. If you look back at Vogue covers from 10 years ago and the content inside the magazine, they have changed drastically.

For years prior to this Anna refused to have any reality TV stars on the cover. However, she made a U-turn on this decision and placed Kanye West and Kim Kardashian on the front.

At the time, Anna stated: “Kim and Kanye were part of the conversation that day, and for Vogue not to recognise that would have been a big misstep.”

That was just the start of a new era for Vogue and Wintour later said in a 2019 interview: “I am a great believer that at a time when things are uncertain and when the things that people believe in are at risk you can’t lead by staying in the middle.”

What does it mean for you? Never say never and always be open to new ideas, they could be your best decisions yet. It also means that if you’re looking at your current website and think it needs a new lease of life, you can count on The Yardstick Agency to give it that Vogue-factor.

2. Stay true to your vision

If you’re the owner of a firm, how often do you take a step back? Do you ever take yourself out of the bubble and consider the reason why you started and the vision you once had?

Wintour said in 2019: “You need to focus on your message and your talent and what you are trying to say, what your vision is, whether you are making dresses, shoes or beautiful necklaces – whatever it is, you have to stay close to your own vision.”

Although visions can change, and rightly so, everything boils back down to the reason why you started.

When I conduct discovery meetings before starting a website project with a client, one of the questions I ask is “What’s the background to the business and why did you start it?”.

Now, this may seem like a simple question, but it really gets to the crux of why financial planners do what they do. If I can understand your reasons for coming into the sector, then I can relay that information through the power of copywriting. Never be shy about talking about your vision. After all, it has got you to where you are today.

3. When you’ve got a team you can trust, anything is possible

I know it’s a cliche, but teamwork really does make the dream work. And when you’ve built a team you can trust, you know that your business can go above and beyond.

How Anna Wintour hires isn’t rocket science, but you can learn a lesson or two from it.

Wintour chooses editors, photographers and stylists who are self-reliant and diverse in their way of thinking. In turn, this allows her to delegate with confidence and trust those working for her to make decisions that once would have fallen on her shoulders.

Wintour encourages team members to argue against her own ideas, saying: “I don’t like people who’ll say yes to everything I might bring up. I want people who can argue and disagree and have a point of view that’s reflected in the magazine.”

The most important lesson to take is if you cover all your blind spots, you’re on the right track and your business will go to new heights.

That’s exactly the benefit of working with The Yardstick Agency. We take care of all your marketing needs and take the weight off your shoulders. We can argue our case, but we’ll equally allow you to argue yours. We’ll check in with you at key stages of the project, but you can put your trust in us to go away and produce something incredible.

4. You can’t wait around for a decision

Wintour once said: “What people hate the most is indecision. Even if I’m completely unsure, I’ll pretend I know exactly what I’m talking about and make a decision.”

Let’s put this into perspective. You’re having a shiny new website from The Yardstick Agency and we’re about to sign off on the initial design.

I’ve just presented the marvellous design to you and I am now waiting patiently for your feedback. What I receive is a short sentence, with a rather vague answer that doesn’t get to the root of the issue. That’s a sign of being indecisive and it doesn’t get things moving along.

Even if you have absolutely no idea what you’re talking about, just go for it and give your opinion. I can promise you that it will be well received and even if it’s not quite right, a bad decision is better than no decision.

5. A little colour never hurt anybody

Anna considers head-to-toe black a fashion faux pas. Although I slightly disagree with the Queen of Vogue on that one (sorry, Anna), I understand her argument.

If your public persona is dark and moody, what impression does that give to potential clients of yours? Although the fashion and financial spheres are different, there’s always room for colour and a little pizazz in every sector, or at least your take on it.

Now, I’m not saying that your entire branding needs to be filled with rainbows and sparkles, but a little sprinkle of colour could give you a helping hand in attracting new clients and make you appear welcoming and inviting.

So next time you hear yourself saying “It needs to be a little darker”, instead think, “What would Anna do?”.

If you want to learn and understand more about us and how we can help you promote your business, email us at [email protected] or call 0115 8965 300. 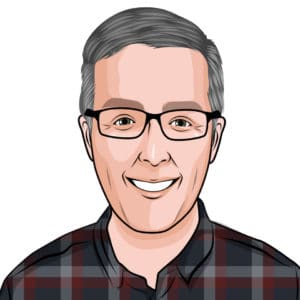