Let’s be honest. At some point in your life you’ve been idly poking around the web when a headline has caught your eye. You instinctively know that it’s clickbait, but there’s something about ‘15 Celebrities From The 90s That Now Live In Rotherham’ that you simply can’t resist.

The human brain loves a list. If you’ve ever read High Fidelity, then you’ll know all about arranging your entire life in the form of a ‘top five’. Numbers provide order and give you a gauge to the value of information. Above all, when you use them in an article title or headline, they work.

Recently, Phil has been looking at how you write headlines that work and how you get people to read all of your article.

I’m going to get more specific and look at why you should use numbers in your headlines or article titles.

As part of their research, they looked at the top ‘three-word phrases’ that start headlines. Here are the results. 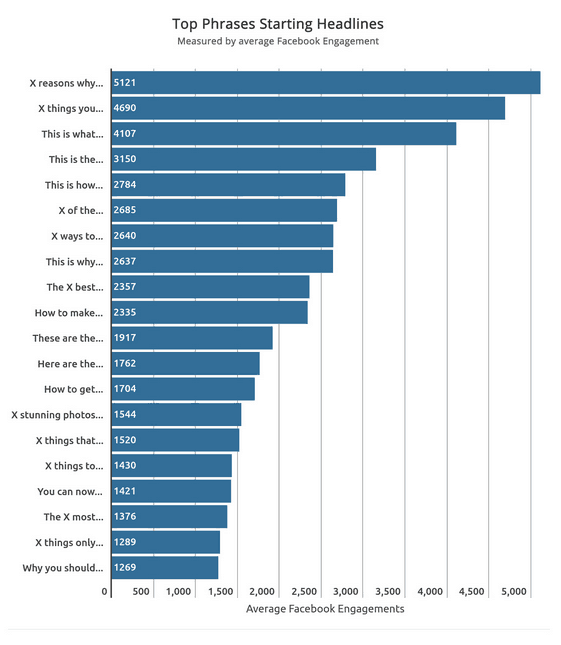 You’ll notice that the top two most engaging headlines began with a number:

Of the ten most engaging phrases in article headlines, five of them featured numbers, including ’10 ways to…’ and ‘The 10 best…’

The simple fact is this: numbers in headlines work. And when we say numbers, we mean ‘numerals’ and not ‘the number written out’.

Many style guides suggest that any number under ten should be written as ‘ten’ and not as ‘10’.

That’s fine in copy, but as your headline? Always. A. Number.

Research has shown that most website readers don’t read all your words. They scan the text and look for highlighted words, links, and numerals. So, using numerals helps them stand out to a reader in the way that the word doesn’t.

(There is science behind this. The shape of a group of digits is sufficiently different from that of a group of letters to stand out to users’ peripheral vision before their foveal vision fixates on them. 8236 looks different and stands out more than four even though both consist of four characters.)

Nielsen say that scanning is even more prevalent for readers of email newsletters. So, if your newsletter has a few article links in it, numbers will work really well.

As part of their analysis, BuzzSumo also looked at which numbers were the most engaging when used in article headlines. 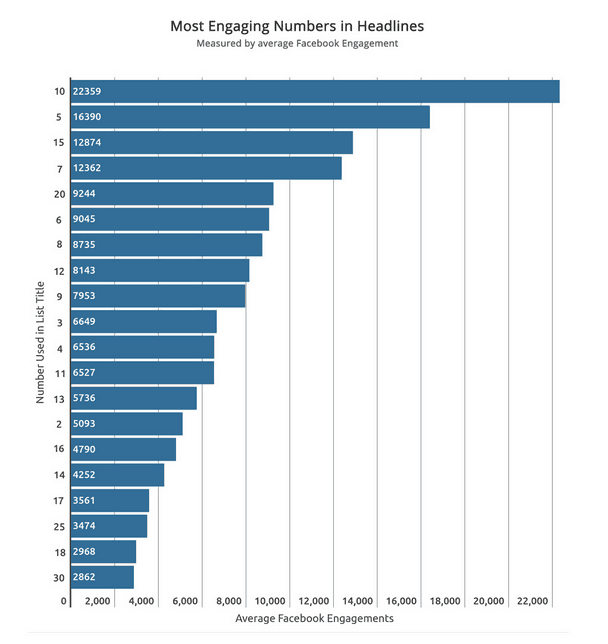 Perhaps unsurprisingly, as we are all bombarded with ‘top 10’ lists in our lives, it’s the number 10 that’s most engaging with readers.

There is even speculation that sites such as BuzzFeed use a specific formula when it comes to creating headlines people will click on:

While the chart above shows that 10 is the most engaging number you can include in your article headline, it can sometimes pay to choose a much higher number. Here are a few examples from around the web:

These higher numbers promise more entertainment value for your click. For any reader with a few extra minutes to spare, that’s an enticing incentive.

Plus, our brains are instinctively wired to understand that ‘more’ usually equals ‘better’. This is why studies have proven again and again that we’re really drawn to numbers in headlines. 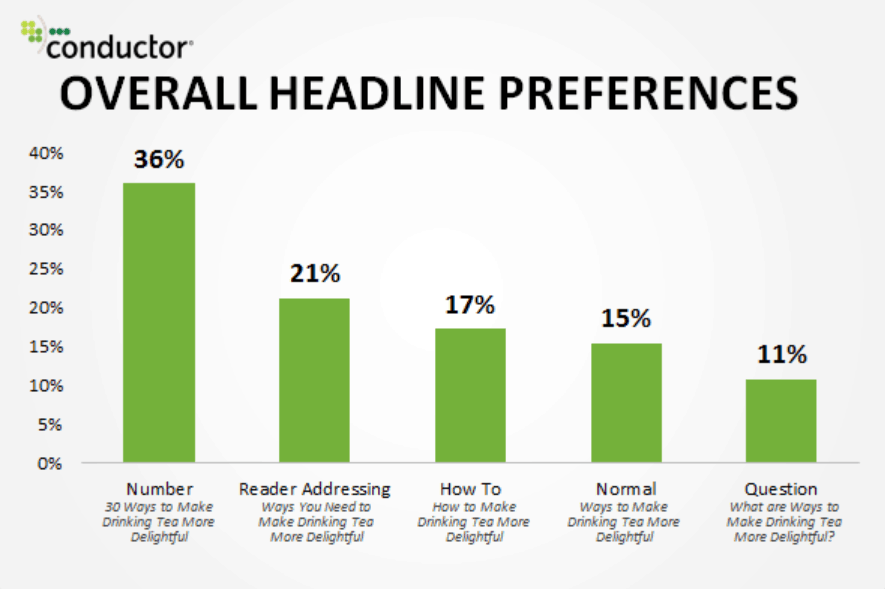 4. It gives your readers a measure of value

At the start of this article, we told you that we’d be looking at five reasons that numbers work in headlines. That’s exactly what we’ve done.

Numbers work well in headlines and titles as they give a reader a sense of predictability. They know exactly what to expect and give your audience a distinct and measurable insight into the value that they’re going to get from reading a blog post.

They also act as a form of expectation management. Readers are looking for valuable information in a quick and accessible format, and a numbered list provides just that.

Eye-tracking research shows that users’ eyes are attracted by numbers in web content. Why? Because numbers usually represent facts. 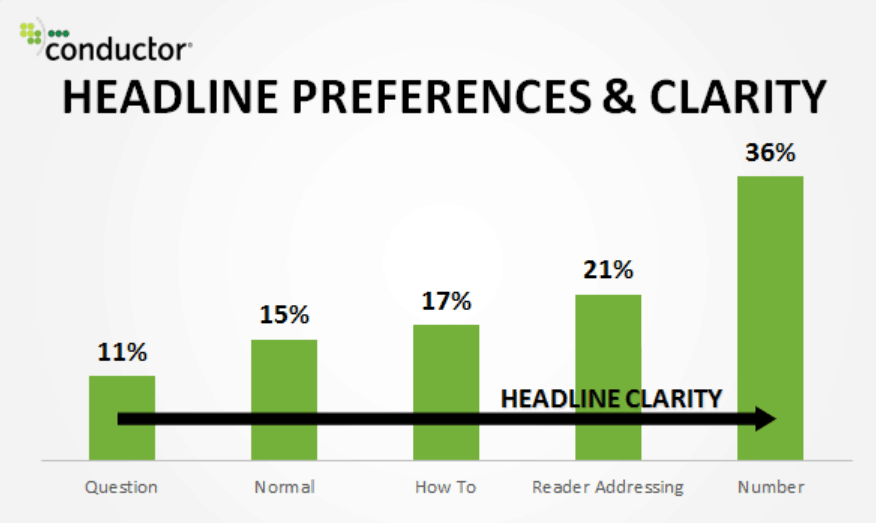 Numerals often stop the wandering eye and attract fixations, even when they’re embedded within a mass of words that users otherwise ignore. Why? People like facts.

Sometimes people are looking for specific facts, such as a product’s weight or size. This is why writing numbers as numerals on these pages is vital.

However, even when a number doesn’t represent a product attribute, it’s a more compact (and thus attractive) representation of hard information than words.

Using these tips will help you to create engaging headlines your readers will love. However, if you don’t have the time to create content, we can help. Get in touch with us at [email protected] or call 0115 8965 300.

This entry was posted on Monday, October 21st, 2019 at 4:20 pm by Nick Parkhouse and is filed under News, Blogging. You can follow any responses to this entry through the RSS 2.0 feed. 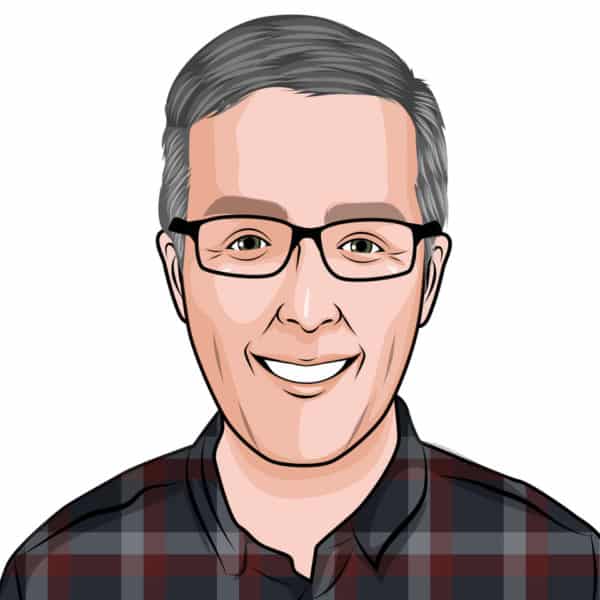 Find out more about Nick
Coronavirus (COVID-19): An update from the Yardstick Agency – 17th March 2020

We’re living in unprecedented times. So, in line with government advice, we have closed our office with the entire team working remotely for the foreseeable future.

That said, it’s business as usual.

Our team are all set up to work remotely and can deal with calls, emails and video conferencing exactly as we would in the office. So, existing clients will see no tangible difference in the service you receive from us. Projects will continue to be pushed forwards, content written and newsletters sent.

Indeed, in these turbulent times, we understand that you might need our services more than ever. Keeping clients reassured, regularly getting in touch with prospects and clients, and ensuring your business is well-positioned for when the pandemic subsides are all hugely important. If you’d like to chat about how we can help, please get in touch.

As always, if you’re not already a client of the Yardstick Agency and would like to learn more about how can help your business right now, we’d love to hear from you. Please call the office or email [email protected]