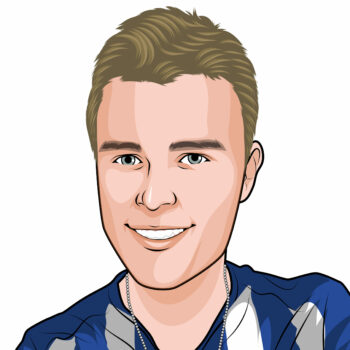 For some reason, Jamie decided to graduate from university during the height of the Covid pandemic in summer 2020. Now armed with a BSc in English Language, he has followed his passion for writing and finally wound up here, ready to put his skills to the test.

Though Yardstick is his graduate position, Jamie worked as an English teacher in both Japan and the UK on a placement year during his time at university. He considers himself to be a language enthusiast and loves to spend a few hours chatting about the intricacies and complexities of languages and communication.

Outside of work, Jamie will be found in one of two places: hunched over his PC or on the Birmingham canals. As if he doesn’t do enough writing at work, he also enjoys his own creative writing, watching anime, and probably plays a few too many video games.

Jamie in the spotlight

Full English, no question. Feels like a treat every single time.

I don’t drink, so it took me far too long to realise this question was about wine…

Hard to choose. It’s easier to warm up than cool down, but the long summer days sell it for me. Nothing beats a warm seaside evening stroll.

As much as I love visiting my family on the south coast… nothing beats an all-out trip to Japan. I’ll never forget my stint teaching there and cannot wait to go back.

Fiction. As a writer myself, I love to create worlds, characters, and inspiring storylines. Reading non-fiction is just glorified research.

Whatever your marketing challenges, we're here to help. Simply complete this form and we'll be in touch.